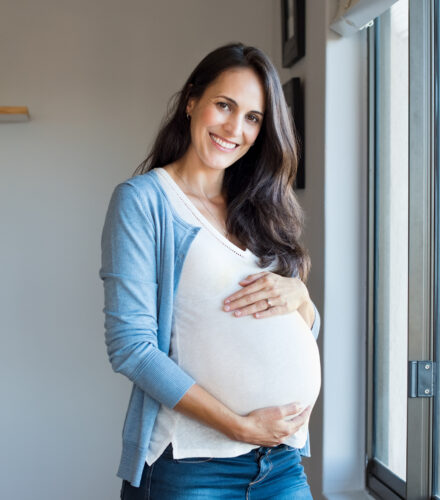 Around 800 million people worldwide are chronically undernourished, especially in South Asia and Africa. Many more people suffer from another form of hunger – “hidden hunger”. This is what doctors call a deficiency symptom that is not directly associated with hunger pains, often not even underweight. Nevertheless, its effects on those affected are serious. It is estimated that about two billion people suffer from a lack of micronutrients. This may be due to lack of access to nutritious food, but also to dietary behaviour.

The phenomenon of hidden hunger also exists in Europe: Around 80 percent of Europeans are not sufficiently supplied with the vitamin folic acid. The health consequences are alarming: in Germany alone, around 800 newborns are affected by neural tube defects, a very pronounced malformation of the spine, every year. The cause is the inadequate supply of folic acid to mothers. Vitamin enrichment of the staple food flour could reduce this problem. But although implementation has been discussed for decades, a legal solution is still not in sight.

“Human dignity and fundamental rights should already be provided to unborn life from the very beginning of its existence.”

May 8, 2000 is not a date of official significance – although on this day in Berlin the integrity of unborn life was decided. At a conference, the Federal Institute for Health-related Consumer Protection and Veterinary Medicine (BgVV) wanted to establish the state of affairs regarding the enrichment of flour with the vitamin folic acid. All relevant stakeholders were present to take a position on this controversial topic. The then President of the BgVV, Prof. Dr. med. Dieter Großklaus, opened the conference with a strong statement: “Human dignity and fundamental rights should be granted to the unborn life from the very beginning of its existence.

The medical necessity of folate

The position of the medical staff followed. For Prof. Dr. med. Berthold Koletzko of the Haunersche Children’s Hospital at the University of Munich, the facts were clear: folate is particularly important during pregnancy for the healthy development of the unborn child – and this from the moment of conception. If folate is missing, neural tube defects can develop. Miscarriages or stillbirths are often the result, as are severe disabilities such as paraplegia or hydrocephalus. In view of the positive experience abroad, the physicians’ representative spoke out in favour of enriching flour with folic acid.

Next, the millers spoke. A representative of the Association of German Mills (VDM) explained that enriching flour with folic acid was feasible without any problems. After all, ascorbic acid (vitamin C) is added to the flour by microdosing every day. The cost of such a folic acid addition was not a significant factor. The financial cost of enriching the entire quantity of German flour with vitamin C was only DM 100,000 (about Euro 50,000) per year.

No vitamin supplement in staple foods

Then the debate turned around. The representative of the Working Group of Consumer Associations (AgV) was critical of flour fortification. The argument: since only a tiny minority of about one per thousand of all pregnant women are affected, forced fortification cannot be accepted by all. Instead, the AgV recommended that affected women swallow folic acid tablets and that gynaecologists should provide better information. And the association’s representative added another warning: if the mills still enrich their flour with folic acid, the AgV would take action against it.

The German Society for Nutrition (DGE) agreed with this position. The necessary daily intake of folate (400µg/day) could be achieved through a balanced diet with lots of fruit and vegetables. In addition, a new “5 a day” campaign is being prepared, which will promote the consumption of 5 portions of fruit and vegetables. The DGE has great reservations about vitamin enrichment of staple foods.

A consensus was not reached at the Berlin meeting in May 2000. Some 20 years have passed in the meantime – and no prediction by the enrichment sceptics has come true since then: The consumption of fruit and vegetables has not been increased and women are still not better informed about the preventive intake of the vitamin folic acid. Instead, over 15,000 severely malformed children were born in Germany alone during this period.

But there is new hope: In recent years, numerous other data on the efficacy and safety of folic acid fortification have also been collected. And other countries are leading the way: Since pale wheat flour has been fortified with folic acid by law in the USA and Canada, the number of neural tube defects has decreased significantly in these countries. In Germany, the uncomplicated supply of people with folic acid through flour fortification is still not a technical problem, but a political and social one.

Folic acid and its salts, the folates, are involved in cell division, growth processes and protein metabolism. A deficiency of folic acid in the blood of expectant mothers can lead to severe developmental disorders of the foetus. The consequences can be reduced mental performance, severe physical malformations (especially neural tube defects) or even death of the unborn or newborn child.

In Europe, about one in 1,000 newborns suffers from a neural tube defect, a highly pronounced malformation of the spine as a result of folic acid deficiency. Prematurely aborted foetuses are not included in this figure. About two thirds of the affected babies survive. However, a quarter of them are so severely affected that they die within a month (Fig. 1). In the surviving newborns with neural tube defects, life expectancy and quality of life are in some cases drastically reduced.

However, a folic acid deficit does not appear to be the only risk factor for the development of unborn life in expectant mothers. There is also initial evidence that in men, folic acid deficiency causes the chromosome number of the sperm to change. Possible consequences are infertility, miscarriages or developmental disorders – for example, Down syndrome, Turner syndrome or Klinefelter syndrome.

To those not involved, these scenarios may seem abstract and distant. For those affected, they mean a drastic reduction in quality of life that could have been avoided by simple means. Incidentally, in the end, we are all indirectly affected: as a community of solidarity, we share the considerable financial burden that enables the sick to survive and makes life easier.

The vitamin folate contained in our food can be absorbed by the human body far less easily than synthetically produced folic acid. While folic acid is almost 100 percent usable, the folate from food is only about 50 percent usable. This difference is taken into account when calculating the vitamin supply by forming a folate equivalent: Here, 1 microgram (µg) folate equivalent corresponds to 1 µg folate and 0.5 µg folic acid.

Folate is the main deficiency vitamin in Europe. While an intake of 400 µg of folate per day is recommended, the average intake for women is about 240 µg folate equivalents. Men still reach almost 300 µg. Experts throughout Europe agree that it is difficult or even impossible for the average person to achieve the recommended intake of 400 µg of folate through food alone.

In order to improve the supply, nutritionists recommend the consumption of foods with a high natural folate content. However, such recommended food changes have never been successful in practice. The best example is the “5 a day” initiative, which was intended to increase the consumption of folate-rich fruit and vegetables, but has not yet been able to achieve its goal despite advertising campaigns worth millions and an unprecedented media offensive.

When viewed soberly, the solution is obvious: A sufficient supply of the vitamin folic acid can only be ensured by folic acid-rich food supplements or appropriately fortified foods. In 81 countries around the world, the fortification of flour is even required by law. As a rule, folic acid and sometimes iron are added to light wheat flour. Whole grain flour is not fortified because it naturally contains more vitamins and minerals.

Many nutritionists are critical for ideological reasons: they see it as their educational mission to teach people to eat healthy foods that are as original as possible from nature. Industrial foods with a high degree of convenience have no place in this world view. Even worse, if these reviled foods are suddenly supposed to be healthier than the apple freshly picked from the tree.

Many consumer associations are also declared opponents of flour fortification and sometimes put forward outlandish arguments in favour of it. For example, a “forced fortification” according to the watering can principle impairs the basic right to self-determination. This seems highly cynical, as the right of the unborn child to physical integrity does not seem to play any role at all. Moreover, this problem would not be a problem at all if one simply proceeded with flour in the same way as with salt: salt is offered in many countries with the addition of iodine and fluorine – and right next to it there is an unenriched version on the shelf.

In the USA and Canada (140 µg folic acid per 100 g flour), Chile (220 µg) and Hungary (160 µg) the enrichment of flour with folic acid is already required by law. In Ireland and Australia, experts are currently discussing mandatory fortification of bread. The frequency of neural tube defects in newborns has fallen by 20 to 50 percent following the introduction of enriched flour in the USA and some Central American countries (Fig. 2). This is despite the fact that the current ratio of folic acid to flour is still far below an optimal dosage that is desirable from a medical point of view.

In a position paper published on 19.10.2006, the German Nutrition Society (DGE) advocates the comprehensive folic acid enrichment of flour. The experts suggest adding 150 µg folic acid per 100 g flour to so-called baker’s flours (types 550 and 630). This would result in an additional average daily intake of 135 µg for men and 106 µg for women. The DGE considers the associated risks to be negligible compared to the expected health benefits:

“The improvement of the folate supply to the population can be achieved by an increased consumption of naturally folate-rich foods in accordance with the recommendations of the DGE. In view of current dietary and lifestyle habits, this can be expected for the majority of the population in the medium to long term at most.

Taking into account the benefits and risks of various strategies for improving the folate supply of the population (increased intake of folate-rich foods or synthetic folic acid from fortified basic foods or food supplements), the DGE advocates enriching flour with folic acid”.