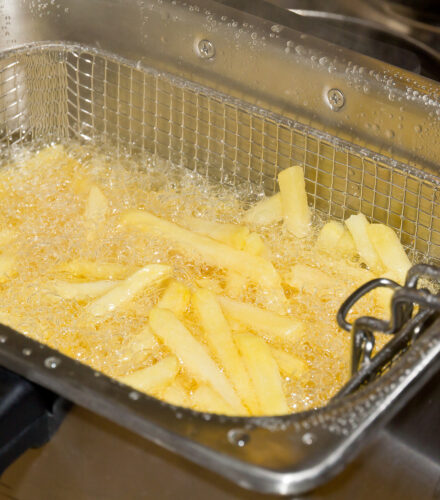 In order to make food more appetizing, digestible and microbiologically safe, humans have been baking, cooking and roasting it at high temperatures for thousands of years. Today we know that the so-called Maillard reaction in these types of preparation produces various toxic substances, such as heterocyclic amines and acrylamide.

In this context, a judgement in the US state of California has now caused a sensation: Although acrylamide maximum values have not yet been prescribed in the USA, large coffee suppliers such as Starbucks, McDonalds and Dunkin’ Donuts are to warn their customers in California in future of a possible risk of cancer from coffee and attach a corresponding note on their cups. The reason for this is the acrylamide that is produced during the roasting of the coffee beans.

The EU is already much further ahead when it comes to restricting acrylamide. The acrylamide regulation has been in force since April 11, 2018, which specifies a maximum permissible value for various foodstuffs – including baked goods. Although scientists doubt that acrylamide in food actually poses a risk, the food industry must of course comply with the legal requirements and reduce the acrylamide load.

“I use acrylamide to seal the joints in my bathroom.”

The Toxin of the Year[1]

In the late summer of 1997, the headlines in the Swedish media landscape were dominated by an enigma for weeks. During the construction of a railway tunnel in the southwest of the country, strange incidents in the surrounding area became more frequent: in an aquaculture near the construction site, fish suddenly died, cows began to stagger on neighbouring pastures, and a little later the tunnel workers also showed neurological disorders.

The solution: Since water ingress had occurred during the construction of the tunnel, the walls had to be artificially sealed. The sealing material used was a synthetic material whose individual building blocks – the monomers – were supposed to polymerize after being injected into the wall, i.e. chain and solidify. But the material did not polymerize, and the monomers were released into the environment. One of the individual building blocks was acrylamide. It was even found in groundwater.

If it hadn’t been for this industrial accident – the environmental chemist Prof. Dr. Margareta Törnqvist from Stockholm University would probably never have found the “Toxic Substance of the Year 2002”, which made it on the front pages of every newspaper worldwide. Because almost five years after the tunnel construction accident, Törnqvist and other Swedish researchers had found the cancer poison acrylamide in food. Above all in potato chips, French fries and crispbread.

The hunt for acrylamide

The Swedish researchers got on the right track by examining the workers involved in the tunnel accident. An analysis of their blood pigment should show how much the men were exposed to the acrylamide. For comparison also a control group was examined, whose participants had never come into contact with technical acrylamide. Nevertheless, corresponding traces in their blood were also detected – in such high concentrations that they must have been exposed to the substance for a lifetime. The question was: Where did this acrylamide come from?

It began a year-long hunt of the researchers for the origin. The first hint: During an investigation of wild animals no indications of contact with acrylamide were found. The scientists’ theory: Unlike humans, wild animals do not deep-fry, grill or fry their food. Could the solution of the mystery lie in heating food? Which supported this suspicion: Acrylamide is also produced during the combustion of tobacco – thus during a heating process. Experiments on rats, which were fed partly normal and partly fried food, finally brought the breakthrough.

After this initial success, Törnqvist’s working group took a closer look at highly heated food. While they could only detect small traces of acrylamide in hamburgers, the concentrations in fried potatoes and other vegetable foods were significantly higher. The common denominator: the proteins and sugars contained react with each other at high temperatures and acrylamide is formed. Through its discovery, the Swedish research team has confronted the scientific community with a new nutritional risk. Researchers around the world have been dealing with this new health risk. What can and what must be done to reduce the health risks to the population?

SPIEGEL ONLINE titled “Simply enjoy cake raw” in a glossary, because carcinogenic acrylamide is produced during the baking process. If it were that simple. We bake and deep-fry precisely because the brown crust and the typical roast aroma increase the culinary value of bread and chips enormously. In purely chemical terms, the amino acid asparagine contained in cereals and potatoes reacts with sugar to form acrylamide. Especially potato chips, French fries, coffee and sweet pastries are notorious for their high content of this toxic substance. Even biscuits, gingerbread and crispbread contain relatively large amounts of it – whereas acrylamide in commercial bread is actually only present in the crust.

If you reduce the temperature during baking, you reduce the acrylamide load in the end product – but unfortunately also its quality. So science starts at an earlier processing step: It had already been proven that foods with a low proportion of the amino acid asparagine contain only a small amount of acrylamide after heating. The researchers therefore investigated how the asparagine content in grain or flour can be reduced. Prof. Dr. Friedrich Longin and colleagues from the University of Stuttgart Hohenheim have cultivated 150 modern bread wheat varieties and 15 varieties of the old wheat species spelt, emmer and einkorn under comparable conditions. They then processed their grains into wholemeal flour and determined the asparagine content.

The influence of the wheat variety

The analysis revealed surprisingly large differences between the bread wheat varieties. The asparagine contents varied between 140 and 450 milligrams per kilogram of wholemeal wheat flour. The variety values for emmer and spelt were in a similar range. Prof. Longin’s team also found large differences in the einkorn. Here, however, the values were between 550 and 840 milligrams per kilogram of flour and thus significantly higher. This means that simply by choosing the right wheat variety, the asparagine content can be significantly reduced right at the beginning of the value chain.

In darker flours, therefore, there is a particularly high amount of asparagine and in their end products correspondingly more acrylamide. This presents the consumer with a choice in which he can only lose: Either he buys the actually “unhealthy” light flour and white flour baked goods made from it with a low acrylamide content or he buys the “healthy” darker types of flour and the wholemeal baked goods made from it with a high acrylamide content. Is there a way out of this flour dilemma?

Strategies of the wholemeal bakers

In the wholemeal bakery, different strategies can be used to significantly reduce the acrylamide in the end product. This includes, for example, avoiding prolonged high heat during baking. Another possibility is to let the bread dough rise longer. Then the yeast consumes the asparagine and the acrylamide potential decreases. In addition, studies have shown that the acrylamide load can be reduced by supplying sulphur fertilizer to cereal fields.

Not all scientists are convinced that acrylamide is a health risk. Acrylamide is as can be prove mutagen, can change thus the hereditary property. This proof was furnished so far however only at mice. With the appropriate investigations the Nager received between 300 and 10.000 micro gram per kilogram body weight acrylamide per day. Such high doses are not usually taken by humans. For comparison: The acrylamide load by food is estimated on the average with 0,3 micro gram per kilogram body weight. Food chemist Dr. Udo Pollmer therefore warns against hysteria:

“The European Union justifies its activities with the reference, acrylamide is carcinogenic. True – in animal experiments. But the situation is different in humans. In many studies the cancer frequency was related to the acrylamide in food, but the expected increase of the cancer rate was hardly ever observed. On the contrary: With rising acrylamide supply the cancer of the intestine even decreased. Not because acrylamide protects against cancer, but because the dark roasting substances kill tumour cells. So the result of a study of the University of Kaiserslautern.

We humans have probably been using fire to prepare our food for a million years. Those who did not tolerate the newly formed substances were already eliminated in the first 10,000 years of human evolution. Quite in contrast to rodents. …they rarely ignite and therefore react sensitively.”

In the eyes of Dr. Pollmer the current discussion around the danger of acrylamide is “an unfavorable mixture of incompetence, pomposity and spirit of the age” (Naturally, 12/2016). But completely independently of this view the new European Union acrylamide regulation limits now times the acrylamide content in food. So measures are required to ensure that the relevant threshold values are not exceeded.

From industry and consumer view knowledge conditions and information situation are unsatisfactory for the effect of acrylamide. With the exact classification and delimitation of the acrylamide risk the science stands still completely at the beginning. This situation provides for an excited uncertainty, which hinders a respectable and constructional treatment of this topic rather. A consumer study commissioned by the Federal Institute for Risk Research (BfR) comes to the result that the topic acrylamide cannot come to rest. In addition the authors: “Psychologically regarded the argument (of the consumer) with acrylamide remains in the status not skillful displacement“.[2] However the reproach of an unsuccessful displacement presupposes that at least the scientists formed themselves a final picture of the substance acrylamide – and that is obviously not yet the case.

Could it be that in the end we are the victim of a psychological self-deception? The mental examination of acrylamide confronts us with the fact that this substance is contained in the particularly popular foods: French fries, fried potatoes, potato chips, coffee. In addition, acrylamide is also produced during preparation. So we have only ourselves to blame and produce the supposedly life-threatening poison at our own stove. It would be much easier to blame the “evil” industry for this problem.

In the public perception acrylamide appears as a hidden, but omnipresent danger, which one cannot escape. In this fearful atmosphere it becomes virtually impossible to understand this substance soberly and objectively as a calculable risk. Well meant rules of thumb of the consumer centers, like for example gilding instead of charring, work thereby like a helpless attempt to make the dangers of acrylamide seizable.

Can we still trust science?

We cannot avoid making a sober recording of the scientific facts about the health risk of acrylamide. Errors are an essential part of scientific progress. Research is not a straightforward march towards truth, but is a zigzagging walk that involves trial and error. Truly innovative ideas need the will to take risks and accept the fact that mistakes can open the door to progress. The result of this scientific digression should determine the priority of entrepreneurial and social measures. If the dangerous nature of acrylamide is confirmed, we should take all conceivable measures to further reduce the acrylamide content of food.