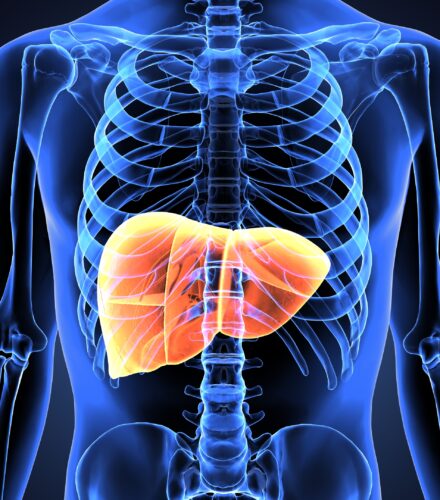 Nearly a quarter of all adults in Europe are affected by non-alcoholic fatty liver disease (NAFLD) – and their number is steadily increasing. In addition to around 85 percent of the group of severely overweight and diabetics, one in three overweight children also suffers from fatty liver. If, over time, the increased fat leads to inflammation of the liver, serious health consequences are imminent: At some point, the liver, the body’s central digestive and metabolic organ, can no longer perform its detoxification and synthesis function – and then blood sugar and blood fat levels gradually derail. The liver tissue hardens, scars and finally begins to shrink. Diagnosis: Cirrhosis of the liver. Since there are no effective drugs for fatty liver, a change in diet is the only treatment approach. But which dietary regime is helpful? And how can specifically developed foods support this diet?

“Do not be deceived by the name – Fatty liver is NOT a disease that could happen to overweight people only.”

Cause of death Cirrhosis of the liver

Many of those affected suffer from fatty liver without knowing it, because symptoms appear late and are diffuse. If fatty liver remains undetected and untreated for a long time, cirrhosis of the liver may already be at an advanced stage. In the final stage, liver transplantation is still the only therapy. However, there is a lack of suitable organs: each transplantation is matched by two new patients on the waiting list. This is one of the reasons why deaths due to liver cirrhosis have doubled in the last 25 years.

Those who need a donor liver for medical reasons are dependent on waiting lists maintained by the Eurotransplant Foundation. This non-profit organisation arranges and coordinates the international exchange of all donor organs in a network of eight European countries (Fig. 1): Austria, Belgium, Croatia, Germany, Luxembourg, the Netherlands, Slovenia and Hungary. This bundled procurement of donor organs from a single source is intended to ensure that patients on waiting lists receive the most effective care possible.

Waiting for the new liver

Whether a patient is even put on the waiting list for an organ donation is decided by the responsible transplant center based on strict guidelines. Decisive factors include the expected success of the transplantation and the urgency of the operation for the survival and quality of life of the patient. Whoever is on the waiting list must always be available. As soon as a suitable donor organ is available, the patient must make his way to the responsible transplant centre.

If the person identified cannot be reached or falls ill, the next suitable person on the waiting list is informed. Patients with alcohol-induced cirrhosis may only be placed on the waiting list if they have completely abstained from alcohol for at least six months. This is because statistically speaking, patients who have not adhered to these six months before a transplantation increase the risk of relapse and also destroy the new liver. In view of the shortage of organs, the German Medical Association categorises potential recipients of a donor liver as worth saving and not worth saving. “We have to weigh up: If this patient or that patient dies.”

The risks of liver transplantation

Life expectancy after liver transplantation depends primarily on the patient’s general state of health and the underlying disease. In addition to the general surgical risks that every surgical procedure entails, liver transplantation can also lead to some typical complications – such as the non-functioning of the transplant or an increased risk of bleeding.

Since the patient has to take medication that suppresses the immune system after a liver transplant, there is a significantly increased risk of infection. A rejection reaction is also possible: In this case, the body’s own immune system works against the new organ, which it perceives as a foreign body. If the underlying disease recurs after a transplantation or if the donor liver also fails, another operation is necessary.

Prevention and therapy through nutrition

Unfortunately, there is no effective medication to successfully treat non-alcoholic fatty liver disease (NAFLD). However, it has been shown that a weight loss of more than 10% can reduce both the inflammation of the organ and the abnormal proliferation of connective tissue (fibrosis) and fatty liver (steatosis). In this context, current guidelines recommend affected patients to reduce saturated fats, calories and carbohydrates.

Could wholemeal flour contribute to a healthy liver diet? At any rate, its positive effect in connection with metabolic diseases has already been proven. However, possible effects on NAFLD have not yet been sufficiently investigated. One assumes however that the consumption of wholemeal flour and products could have a positive effect on the course of disease due to the higher content of nutrients and secondary plant substances in NAFLD patients. The specific properties of secondary plant ingredients in particular offer hope: they not only have an anti-inflammatory effect, but also have a positive influence on the intestinal microbiome.

To test the health effects of whole grain products on people with NAFLD, a 12-week study was recently conducted. Over this period of time, one group of overweight people consumed mainly whole grain wheat bread, while a second group was given bread made from refined, light wheat flour. At the end of the study a total of 33% of the subjects suffered from fatty liver – 44% of the white flour group and 25% of the wholemeal bread group. In addition, a statistically significant decrease in intestinal microbial diversity was found in the participants of the white flour group. Based on these data, the authors concluded that a diet rich in whole grain bread could help prevent the development of NAFLD.[2]

This study is a first small step on the long road to preventing non-alcoholic fatty liver disease through a diet of health-optimized foods. The study impressively shows what healing powers lie in nature. To use its full potential, we need more studies and functional SuperFood foods that make the difference. Then – and only then – will Hippocrates’ dream be: “Let your food be your medicine and your medicine be your food.”