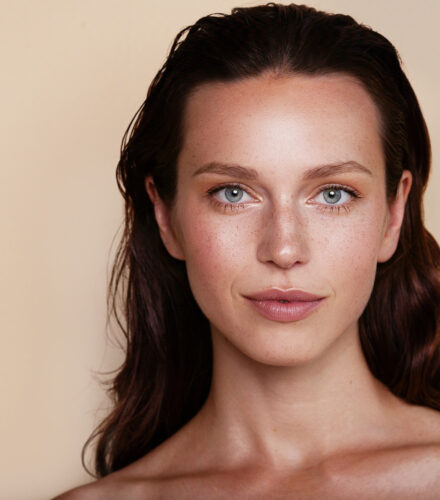 First impressions count. In a fraction of a second our brain decides whether we consider someone attractive, competent or trustworthy. And in this unconscious evaluation, the condition of the facial skin plays a decisive role. Pimples, freckles, birthmarks: Every little bump on the skin affects the first impression others make of us. But why does the skin in particular play such an important role? On a physical level, we subconsciously interpret smooth facial skin as a sign of health. On the mental level, we associate maturity and competence with pure skin – in contrast to skin impurities, which we have stored either as typical puberty symptoms or as signs of insufficient care. Is our skin fate? Of course impure skin is also a question of disposition. But latest research results suggest that skin impurities can at least be influenced by nutrition. So what do we eat for impure skin?

The comeback of nutrition therapy

Acne is a very common disease in western countries, especially among teenagers and young adults. Velvety soft, smooth and flawless skin like supermodels – this dream should remain unattainable for most teenagers. Instead, four out of five teenagers and many adults struggle with blackheads, inflammation and pimples. Since acne has a significant impact on the individual quality of life, treatment is essential. Medical nutrition therapy is currently experiencing a kind of comeback.

Already at the end of the 19th and the beginning of the 20th century, diets were frequently used as an additional treatment for acne. In the course of the 1960s, the connection between nutrition and skin texture receded into the background as cosmetic skin products promised a simpler solution – from healing earth to peeling and modern cleansers. However, success often failed to materialize. In the meantime dermatologists and nutritionists are increasingly interested in the role of medical nutrition therapy in acne treatment.

The skin as a mirror of the intestine

The intestine is more than just a part of our digestive system. It supplies our body with nutrients and energy, serves as a detoxification and supports the immune system. It is also connected in a complex way with all other organs. If the function of the intestine is disturbed, this can also restrict other organic processes in the body – and can be seen, among other things, in the appearance of the skin. If the intestine can no longer detoxify the body sufficiently, other organs must take over this task, such as the kidneys, lungs and skin. Our skin therefore also reflects the state of our intestines.

In 2002, scientists had reported that they had not found a single case of acne in islanders in Papua New Guinea or in indigenous people of Paraguay. The researchers concluded that a diet rich in fruits, fish, tubers and coconuts could protect against acne.

Science is discovering more and more evidence that diet could be crucial in determining how severe acne is. For a recent study, US researchers have combed through studies from the past 50 years – and their results support this theory.[2]  Milk and carbohydrates in particular, which cause blood sugar levels to rise rapidly, are said to promote or even cause acne. The consumption of such fast carbohydrates also indirectly stimulates the pancreas to secrete the hormone insulin. In this way, adolescent hormone changes are intensified, so that the sebaceous glands are stimulated and produce excessive amounts of sebum. In the case of milk, the researchers identified milk proteins rather than milk fat as the component that promotes acne.

A small study in South Korea had already found similar findings:[3]  A diet that leads to a low total glycemic load on the body could alleviate the symptoms of acne patients within ten weeks, the researchers reported in the journal ‘Acta Dermato-Venereologica’. The study participants had consumed a quarter of their energy in the form of protein, almost half in the form of carbohydrates, which cause blood sugar to rise only slowly, and almost a third in the form of fats. The subsequent tissue examinations showed significantly improved skin texture.

[2] Jennifer Burris et al., Acne: The Role of Medical Nutrition Therapy, Journal of the Academy of Nutrition and Dietetics, March 2013.