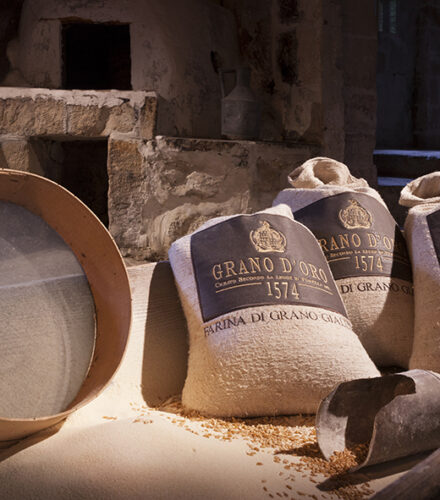 Butter melts on warm toast and the air is infused with delicate roast aromas. A long drop of golden honey spreads elegantly over the crispy fresh bread. With full-bodied sweetness, the first bite makes the taste buds vibrate. It tastes like summer, like a flower meadow and like… “STOP!” cries the nutritionist. “Too much sugar, too much fat and too much white flour. Couldn’t you do it in a healthier way?” Sure you can. With healthy white wheat flour. But where can you get that?

“Healthy or not, as long as it’s tasty.”

Taste begins in the head

What is healthy cannot taste good – and vice versa. Our eating habits are also shaped by thought patterns that have developed and consolidated over centuries. If we do not succeed in breaking these old patterns, we have already given up the search for healthy and good-tasting alternatives before it has really started.

Perhaps we should take inspiration from Astrid Lindgren’s classic ‘Karlsson from the Roof’. In this book for young people, seven-year-old Lillebror talks to his parents:

“Thanks, son”, said dad. “How was that? Sure you don’t want more cauliflower?”

“But he is healthy,” said Mom.

“I thought so,” said Junior. “The less you like a meal, the healthier it is. Why do they stuff all those vitamins in things that taste bad? I’d really like to know that!”

“Yes, isn’t that funny?” Birger said. “You think they should put them in candy or chewing gum instead?”

“That’s the most sensible thing you’ve said in a long time,” said Junior.

Children’s books can sometimes be a refreshingly creative contribution to solving a problem.

Wheat flour has been around since humans settled down 10,000 years ago. You can pay homage to this tradition and leave everything as it is – or you can lead it into the future, reinvent wheat flour or at least develop it further to meet modern needs. George Bernard Shaw may not have thought about flour, but he always knew: “Tradition is a lantern. The dumb man holds on to it, the smart man shines the way.”

To decipher the future of wheat flour production, we need to answer the following questions:

3 And finally: Who is the pioneer who first takes advantage of these opportunities and shapes the future of wheat?

Health is a megatrend – and nutrition plays a central role in this. Nutritional and health awareness continues to grow and has long since reached the center of society. This is not least due to media coverage, because articles and contributions about healthy nutrition are attracting a great deal of interest.

In addition, most people are aware that the wrong diet can trigger diseases of civilisation. This means that everyone has the responsibility to make an important contribution to their own health. This development is so dynamic because we are not only driven by the fear of illness and a guilty conscience, but also attracted by positive prospects – the chance of health, fitness and vitality, of success at work and in life. This is how healthy eating becomes a desirable lifestyle.

First the healthy, then the tasty

Unhealthy but tasty. Why have we internalised this correlation so much? Its cultural roots go back a long way and have their origin, for example, in Protestant work ethics. First work, then pleasure. So the valuable and laborious is set against the pleasant. Applied to nutrition, one could say: first the healthy and then the tasty.

And we do everything in our power to pass this belief on to our children: When you finish your broccoli, the reward is a custard. But how are children supposed to learn to love vegetables when carrots and Brussels sprouts are treated as an annoying chore before the actual pleasure?

Numerous studies have shown that just the announcement of being served healthy food lowers expectations of taste. In the ‘Mango Lassi Experiment’ at the University of Texas, test participants rated a yoghurt drink as less tasty when it was advertised as particularly healthy. If, on the other hand, its high calorie content was emphasized, the testers praised the taste.

The best recipe against such false taste expectations is education: Researchers at the University of Kiel were able to prove that with increasing health awareness, the basic assumption that healthy food tastes worse than unhealthy food disappears.

Expectation of taste as a question of culture

Surprisingly, in France the opposite of the unhealthy and tasty rule applies. The French expect healthy food to taste better. Researchers at the University of Grenoble attribute this primarily to the more pronounced culinary quality awareness in France. Fewer artificial flavours, more fresh ingredients and carefully composed dishes. We should be inspired by this culinary philosophy of enjoyment of the French.

The path to health no longer leads through prohibitions, sins and the dogged focus on abstract nutritional values. Instead, the nutrition trend ‘Soft Health’ concentrates on taste, naturalness and quality – and thus combines the desire to eat with a balanced diet and positive effects on one’s health.

Soft Health is based, among other things, on the fact that the joy of life is indispensable as a psychological basis for individual health. Our striving for health must not be perceived as a stress factor and contradiction to the good life. Only food that we enjoy can therefore really do us good. Beyond strict beliefs and ideologies, a personalised diet based on conscious enjoyment is thus developing – without any burdensome ideology.

The luxury of nature

The solution to the super wheat we are looking for is actually already on the table: the seed databases of the world contain over 800,000 wheat varieties, only a fraction of which are cultivated. But even behind the apparently absurd characteristics of these varieties, whose meaning is not apparent at first glance, there is a purpose of existence that has arisen over a long period of evolution. Because in nature there is no luxury without function. So let us discover together the intrinsic health value of super wheat. Let’s go on a search!