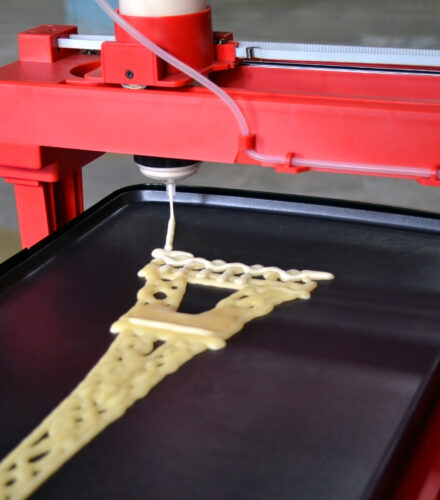 While 3D printing is already indispensable in many industries, the technology is still in its infancy in the food sector. This could soon change, however, because with NASA and Roskosmos, the US and Russian space agencies are working at full speed on further development. The aim is to use food 3D printing to supply astronauts with an attractive range of food products in space. The process is still very costly and cannot compete with conventional food production in terms of price. But beyond the mass market, 3D printing is already showing great potential – for example in the premium segment or in the area of individual health. What still sounds like science fiction today could soon open up completely new possibilities in the production of highly innovative food.

“To cut down on delivery charges, NASA invests in research to 3d print pizza for space travellers.”

The Evolution of Cooking

Although the preparation of our meals is an original part of human culture, it has evolved over the millennia. Whereas people once gathered around open cave fires or cooked their food in earth pits or clay ovens, today we cook in futuristic-looking high-tech kitchens. Whereas the first dishes were still made exclusively from fresh and untreated food, industrially produced convenience products now play an important role. Food 3D printing even goes one step further and “prints” real food from powder, water and flavours.

Although this technology is developing rapidly and the prices of 3D printers have already fallen sharply, the established methods of food production are still unbeatably inexpensive. Only when the cost of 3D printing could be reduced significantly again would the food industry be interested in further development for the mass market. Consumers are also still sceptical about this unfamiliar technology. So it could be a while before the next evolutionary step in cooking reaches the middle of society.

Star Trek has shown how it can be done: On board the starship Enterprise, replicators can produce any object recorded in its atomic structure – including food. Even today, it is still the large space agencies that use food 3D printing not only to keep their astronauts alive with welded-in functional food, but also to offer them some culinary variety in space.

Since 2006, NASA has been researching methods for producing food using 3D printing in space. In 2013, the US space agency developed the “Chef3D printer” in cooperation with a 3D printer producer. It prints a pizza that only needs to be heated in an oven. Pizza is particularly suitable for this project because it is relatively simple in design and the necessary raw materials can be stored for several years without any problems. For 2024, NASA is planning a mission to the moon, in which food 3D printers will also be used.

The Systems and Materials Research Corporation (SMRC) was commissioned by NASA to develop a complete feeding system for long-term missions beyond Earth orbit – for example, manned missions to Mars. SMRC’s system is to include a nutrient storage system, a mixing system for the printing pastes and, of course, a 3D printer that will prepare hot and tasty meals to the astronauts’ individual tastes in the shortest possible time. Another advantage of the 3D printing system compared to shrink-wrapped functional food: it produces no waste.

3D printing also opens up completely new possibilities in the medical and pharmaceutical sector – for example, in the huge market for dietary supplements. The start-up Multiply Labs is already using the technology to produce personalized products. This means that every customer can put together his or her own personal pill from 15 different vitamins, minerals and other ingredients in different dosages – and thus take the optimal dosage for each individual.

The future of 3D food printing

While the initial results of 3D printing of food were rather unspectacular, the technology has now developed significantly. Today, chocolate (Mondelez), sweets (Nourished) and even pasta (Barilla) are already being commercially distributed from the 3D printer. One of the biggest advantages of this technology is the almost unlimited freedom of design: 3D printers can create extremely complex and filigree shapes that are hardly possible with conventional methods.

For example, the well-known pasta manufacturer Barilla produces elaborately 3D-printed pasta shapes under the BluRhapsody brand. The Italians use a mixture of durum wheat semolina and water as printing material. The printed fresh pasta is deep-frozen and sold to gourmet restaurants and professional chefs.

In general, 3D printing offers the food industry the possibility of “mass customization”, a profitable path between individualization and mass production. While consumers increasingly reject standardized mass products, they are demanding personalized products based on their individual preferences. With the design freedom of 3D food printing, this demand can already be met in the premium segment.

And when will 3D food printing become established for the mass market? In the past, technological innovations have been particularly successful when they have been able to generate a large demand. The technology is on the right track and is already in use in various areas. Now it’s a matter of selling it in a way that people accept it.