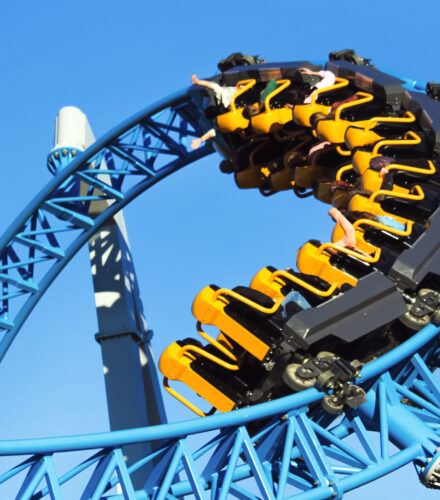 Roller coasters are great fun. But all day long? No, thanks! It’s just exhausting. It’s the same with the blood sugar roller coaster: it awakens the desire for sweets, triggers mood swings, robs us of energy and concentration and even leads to weight gain. Carbohydrates are responsible for the increase in blood sugar.

Shortly after eating foods containing carbohydrates, the blood sugar level rises because glucose is transferred from the food into the blood. Subsequently, the release of insulin is stimulated. Insulin influences glucose and fat metabolism in many different ways (see Fig. 1) and ensures that the sugar in the blood is absorbed by the body cells.

“I don’t just eat chocolate; I give calories a home.”

How sugar makes you sick

Carbohydrates are the only basic nutrient that directly influences the blood sugar level. They are therefore not only important for energy production, but are also associated with many diseases in which elevated blood sugar levels play a role (see Fig. 2).

Numerous health problems are at least indirectly related to an elevated blood sugar level. This is because sugar and its breakdown products lead to long-term damage to various cells. A diabetes disease damages the entire body and thus increases the risk of numerous secondary diseases.

Diabetics used to suffer from arteriosclerotic vascular changes and the probability of a heart attack or stroke is twice to three times higher for them than for non-diabetics. Type 2 diabetics are also more likely to develop cancer, especially liver cell cancer. In addition, diabetes is associated with a higher incidence of depression and mood disorders, dementia and Alzheimer’s disease. Optimal blood sugar levels could significantly reduce the risk of many of these diseases.

The weakness of the glycemic index’.

While white bread, French fries or fruit have a high GI and are quickly metabolized, science has long recommended that pulses and other slow carbohydrates with a low GI be preferred to them. However, because the blood sugar response is different for each person, researchers are increasingly questioning this blanket classification into foods with high, medium and low GIs.

In 2004, after an elaborate and extremely long phase of product development, GoodMills Innovation GmbH introduced a bread that had fantastic health and nutritional values on paper. Its glycemic index was a low 38 (toast bread reaches a value of 80), the glycemic load was 6 and the fibre content was 10g – significantly higher than whole grain bread.

During the development phase, different types of bread were tested. When the participants’ blood sugar levels were subsequently analysed, the surprise was huge (Tab. 1): the personal GI values were extremely different and ranged from fantastically low 37.1 to extremely high 143.0.

Tab. 1: Exemplary measurement of the glycemic index on ten persons, measured values of a bread from 31.10.2002

A consistent change in diet is the easiest way to optimize your own blood sugar response. But research is also constantly discovering new possibilities. In an analysis of around 3,800 drug signatures for the reduction of blood sugar levels in type II diabetes, sulforaphane emerged as the dominant substance. According to initial research results, the compound, which is found in broccoli and other cabbage vegetables, is even believed to be able to reverse the disease signature of type II diabetes. One problem: just like broccoli and cabbage, the taste of sulforaphane extract is not to everyone’s taste. And thus we are again with the initial question: Which possibilities and beginnings have Mueller, in order to meet the blood sugar point problem with innovative solution contributions