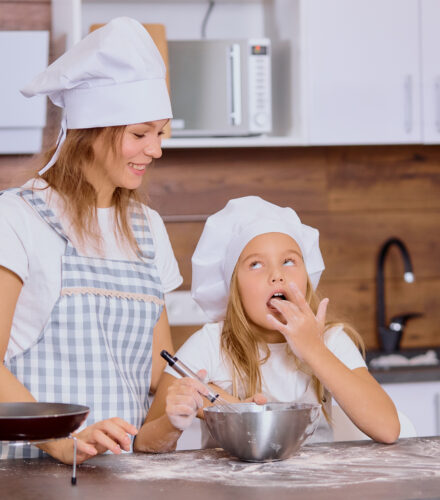 In granny’s day, there was no greater pleasure: Grandma baked a cake and we kids were allowed to lick out the bowl of cake batter. But that was in the past: Today we know that the delicious dough can contain germs that make us ill. What can we do about it? We want to lick out again without any worries!

“Don’t forget that the bacteria watch us from the other end of the microscope.”

January 24, 2019 was a tough day for Jim Murphy. As a board member of General Mills, America’s largest food producer and the world’s leading flour producer for 150 years, he had to publicly warn people about flour from his own mills. A huge loss of public image. Previously, control tests in General Mills’ well-known flour brand ‘Gold Medal’ had revealed salmonella infestation. The finding was so serious that Jim Murphy, in order to avoid potential illnesses, had no choice but to say publicly, “If you own this product, throw it away.”

The news was a shock to the nation. Within an hour, every American television channel was reporting live on the news. Fortunately, no one fell ill this time, but three years earlier General Mills had already been affected by the same salmonella contamination. At that time the infestation was only discovered after several consumers became seriously ill after eating unheated flour. How could this happen? And above all: how can it be prevented in the future?

Traditional cookie dough usually contains wheat flour, butter, sugar and usually also egg. It is generally known that eggs can carry salmonella. The pathogens are usually found on the egg shell and are incorporated into the dough when it is whipped. Salmonella can cause stomach ache, fever, headache and diarrhoea.

How can it be that supermarkets today sell cookie dough for raw consumption? In New York, there is even a shop that offers cookie dough in a wide variety of flavors. Quite simply, most products of the new food trend do not contain eggs. For this reason, it is explicitly stated that the consumption of these raw doughs is not dangerous to health.

However, the consumption of raw flour can also be questionable. For flour is obtained from grain grown in fields. Everything that accumulates there remains on the grain even after harvesting – from environmental pollution to animal secretions and, of course, pathogens. In the mill, the grain is first cleaned at great expense, but bacteria are not completely removed. Nature simply does not produce sterile food. After cleaning, the cereal grains are ground into flour – naturally with the germs it contains. However, most of them are completely harmless, especially since they cannot withstand the heat of the subsequent baking process and are killed.

Wave of infection in the USA

In 2016, the American Food and Drug Administration (FDA) warned against eating raw dough, as the flour it contains could be colonized by pathogenic germs. The reason for this precaution was a previous wave of infections: Dozens of people had become infected with the bacterium E. coli O121. Although flour contains hardly any moisture and thus does not actually promote bacterial growth, pathogenic microorganisms in flour can remain viable for months – like the bacterium E. coli O121.

It turned out that the diseased had either eaten raw dough or at least had had contact with it and that the flour contained in it was infected. As a result, 10 million pounds of flour were recalled from the food trade throughout the USA. According to the FDA, parents should also make sure that children – for example in kindergarten – do not model with raw dough. Even if they do not eat the dough, they should wash their hands afterwards.

Due to these risks, producers and sellers of ready-to-eat raw dough have adapted their recipes accordingly. They produce their dough mainly with pasteurised, i.e. heat-treated eggs and heat-treated flour. This special processing kills possible salmonella in the eggs and most of the germs in the flour.

Unfortunately, heat-treated flour is currently only available to industrial customers in wholesale. But if your own children do not want to do without raw cake dough, you can heat-treat your household flour yourself. All you have to do is heat it on a baking tray in the oven at 200 degrees for at least 20 minutes. Unfortunately it is difficult to check the success of the treatment. Even quality control in professional mills takes almost a week to obtain reliable results.

Incidentally, the heat-treated flour is not very suitable for baking. This is because, in addition to the germs, the heat also destroys the wheat gluten, which ensures a loose crumb, especially in yeast pastries. What is the solution to this technical challenge?