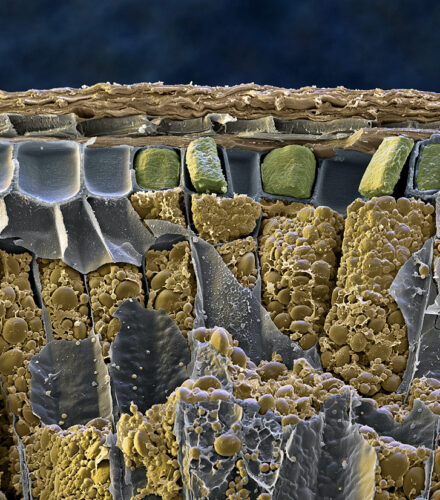 Fibres are the losers of industrialisation. While 10,000 years ago, 100g of dietary fibres per capita were consumed daily, today the European average is only 20-25g. This is not too far from the 30g that nutritionists today recommend as a daily intake. But it is suspected that this low recommendation is not based on the greatest possible health benefits, but rather on what is considered realistic in the age of industrially processed foods.

Fibres simply do not have a lobby. This is also shown by their price: today, mills sell bran at a fraction of the price they obtain for the refined light-coloured flour. The most important buyer of this bran is the animal feed industry – and they do not see the valuable waste product as a supplier of dietary fibre, but as an aid to animal fattening. Thanks to the protein-rich bran, their animals reach their slaughter weight very cheaply and quickly.

But there is hope: New revolutionary research shows that dietary fibres can not only prolong life, but as psychobiotics they can also prevent and even prevent widespread diseases such as dementia and Alzheimer’s. So dietary fibres are true superfoods and the ideal food for our second self: the microbiome. It is high time that we helped them make a brilliant comeback.

“Your boyfriend had a dream about potatoes and you’re asking me to interpret it? I’m just old. Being old doesn’t mean you know more; it means you ate enough fiber.“

If people want or need to pay attention to certain nutrients, nutrition labelling is an important orientation when buying food. Its correct form is regulated by the EU Food Information Regulation (Regulation (EU) No. 1169/2011). Among other things, it stipulates that the seven most important nutritional values must be labelled on almost all packaged foods: energy value/energy content, fat, saturated fatty acids, carbohydrates, sugar, protein and salt.

Dietary fibre is missing from this list. Like vitamins and minerals, they only need to be listed if they are specifically highlighted as a product promise. The result of this regulation: unfortunately, dietary fibres are only very rarely included in nutrition labelling. Incidentally, the EU has thus opted for an isolated solution. Although dietary fibres are carbohydrates, they are not understood in this way in the EU – unlike in the USA, for example – and are not correctly indicated in the nutritional value table.

NUTRI-SCORE as a savior?

So that it becomes recognizable at first sight whether a product is healthy or unhealthy, the German policy now wants to take over the NUTRI-SCORE system originating from France. Here ballast materials play suddenly again an important role. Because they are offset – like among other things also protein – as an ingredient rather favorable for the health with rather unfavorable contents materials – e.g. sugar, fat and salt. This results in an overall score, which is translated into a colour-coded label with a letter underlining it. Here, the fibre content finally decides whether a food is considered healthy or unhealthy. However, the calculation method is somewhat problematic.

Since NUTRI-SCORE is a voluntary label, it is not used by all manufacturers. Private websites therefore try to close this information gap by making the appropriate calculations for unlabelled foods themselves. As the percentage of dietary fibres is usually missing in nutritional information, estimates are often used. This in turn causes displeasure among manufacturers who calculate the NUTRI-SCORE of their products with the correct – but not reported – dietary fibre values and thereby arrive at better classifications.

A further marginal note of the labelling madness: In the NUTRI-SCORE calculation, dietary fibres are only taken into account up to an upper limit of 4.7g per 100g – although of course many products contain considerably more dietary fibres. Background for this method are possibly the French consumption habits, in which dietary fibre-rich products hardly play a role.

A survey from Germany wanted to find out what health image certain foods have. In response to the open question of what they consider to be healthy products, the respondents named fruit and vegetables by far the most frequently (see Fig. 2). In contrast, wholemeal bread ranked 6th and wholemeal products even only reached 13th place.

In response to the open question of what the respondents understand by a vitamin-rich diet (see Fig. 3), wholemeal bread, which is naturally rich in B vitamins, then plays no role at all. Fruits are mentioned in the first place and vegetables in the second.

These results can be used to identify which properties are attributed to certain foods (see Fig. 5).

Fruit and vegetables are rich in vitamins and therefore healthy. Cereals and bread – especially wholemeal bread – are rich in dietary fibres and these are good for digestion. This means that cereals are certainly relevant to health, but this is limited to the somewhat unappetizing topic of the intestines. While vitamins stand for proactive health, dietary fibres are more in therapeutic use: they only become important when digestion is not going so well.

Even beyond digestion, dietary fibres have a variety of health benefits. The “European Prospective Investigation in Cancer and Nutrition” (EPIC study) has impressively proven this. In one of the largest studies worldwide, more than half a million participants from ten European countries were followed for almost 15 years (http://epic.iarc.fr/). What makes the EPIC study stand out is not only its sheer size, but also its high methodological quality. It has only one problem: its sensational research results have unfortunately been insufficiently communicated – perhaps also because they contradicted many learned prejudices.

For example, it has been proven that an increase in average fruit and vegetable consumption of 150g per day would prevent only 2.5% of all cancer cases. And even this small effect was limited to ‘heavy smokers and drinkers’ who consumed large quantities of fruit and vegetables. For the general public, no comparable relationship could be established[1].  This result was so surprising because the most famous study on cancer and dietary factors to date, by Doll and Peto[2] (1981), concluded that an estimated 35% of all cancer deaths could be prevented by dietary changes (Fig. 6).

Doll and Peto could not clarify with certainty which nutritional factors are responsible for the development of cancer. However, there was much to suggest that a diet low in fruit and vegetables, high in fat and high in calories has a tumour-promoting effect. Worldwide the findings of Doll and Peto were interpreted in such a way that an increase in fruit and vegetable consumption should be recommended.

Subsequently, the so-called “5 a day” campaign was launched in the USA and Europe (Fig. 7). The largest health-related campaign of the last century was to increase the consumption of fruit and vegetables – in Germany from an average of 350g to 650g per day. The effect was minimal: Neither the increase in fruit and vegetable consumption was even remotely achieved, nor were any health effects achieved. The conclusion of a scientist involved in the EPIC study: “The 5-a-day campaign was therefore not a health measure but a marketing idea with an uncertain outcome“[3].

The error of nutritionists

Why nutritional scientists worldwide had hoped for more protection against cancer from eating plenty of fruit and vegetables, nutritional researcher Prof. Dr. Hans-Georg Joost, one of the EPIC researchers, explains in a ZEIT interview[4]:

“At the beginning of the nineties, only the results of case-control studies were available. Here a group of people who have already been diagnosed with cancer is compared with a healthy control group. This study design, however, brings a big problem with it: In the control group, only particularly motivated and health-conscious people participate. So we have a big difference right from the start, which is not only in the disease: The participants in the control group are not only healthier but also more health-conscious than those in the case group. And this is what everyone who believed in the great effect of a diet rich in fruit and vegetables fell for.

The EPIC study is designed quite differently. Here, the health of people who were all initially undiagnosed with cancer is monitored over many years. So the participants who fall ill during this time and those who stay healthy are absolutely comparable. However, such prospective studies have the disadvantage that, particularly for rare diseases, many participants have to be observed over a very long period of time.

And the most important result of the EPIC study? In short, high fibre consumption reduces the risk of colon cancer (Fig. 8). The values corrected for lifestyle factors halve the risk with an intake of 40g of fibre per day ¬- compared to an intake of 10g. A comparably strong effect cannot be achieved even with the best medication.

Unfortunately, the positive EPIC findings on dietary fibres must not be communicated by food manufacturers. This is prohibited by EU Regulation 1924/2006: According to Article 4, food manufacturers may only use nutritional and health claims on foods if they are included on an EU positive list and the food in question also meets a predefined nutrient profile. Currently, two health claims[6] are allowed for wheat bran: “Wheat bran helps to accelerate intestinal passage” and “Wheat bran helps to increase stool volume”[7].  Two statements that should be generally known by now and which are rather unsuitable to make people want to eat and drink when printed on food packaging.

The path to a new image

Dietary fibres and bran are therefore based on the prejudice that they primarily promote intestinal passage. Getting them out of this thinking drawer will take a lot of time. To develop a new, positive image for these underestimated nutrients, a completely new approach is necessary. In all experience, it is not the one big and perfect innovation that will be the key to success. Instead, such an image turnaround is most likely to succeed through the interaction of many small ideas. To achieve this, a wide variety of players must rethink the topic, give it room to develop and develop as many prototypical approaches as possible. May the better one win!